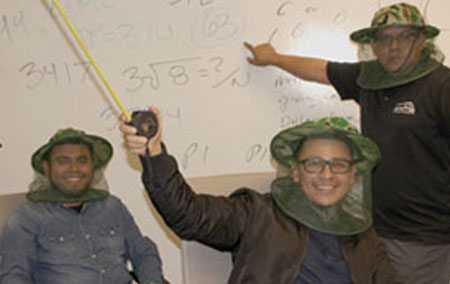 No, really! Two of our three estimators at Antis have literally been attacked by swarms of bees while on the job. (And it’s only a matter of time, Fernando…)

Ruben Salas, Orlando Osorio and Fernando Torres are the steadfast Estimating Team at Antis. We’ll get to the stinging in a minute. These guys have far more in common than bees! Each of them comes from a family of roofers and they all got their first roofing job from a family member. They were also very successful as field technicians before their estimating roles, which gives them unique perspective and insight and contributes to their expertise as estimators.

Ruben is the veteran. Though he joined Antis in 2017, he landed his first roofing job from an uncle in 1986 and has never looked back. He has more than 20 years of experience including specializations in production homes and solar at another company, where he and his boss were attacked by a large swarm of bees out of nowhere. One moment, the two men were talking on a job site and the next, they were surrounded by a loud humming noise and an onslaught of stinging insects. Both men took off running. Ruben’s boss jumped into his car and Ruben jumped into his boss’s lap, where they hunkered down waiting for the swarm to pass. No harm done – but maybe just a little awkward?

Orlando was not so lucky. He was on the job with Antis on a 40-foot ladder atop a three-story building when a swarm of bees attacked him and one of his co-workers. Orlando was able to quickly scale the ladder and get away, but not before both he and his colleague were badly stung. Luckily, they both made a full recovery and Orlando decided to stay in roofing despite this harrowing experience. Lucky us! Orlando joined Antis in 2009 and got his start here working in the field. His strong work ethic and ability to quickly learn new skills earned him a position as an estimator. His valuable experience in the field (including sliding down 40-foot ladders to escape stinging insects) contributes to his ability to create a strong scope of work to resolve any potential issues.

Last, but certainly not least, one of our rising stars, Fernando, began his career at Antis in 2014. Like Ruben, Fernando comes from a long line of roofers and was connected to his first job by an uncle when he was fresh out of high school. Smart, ambitious and hard-working, Fernando quickly advanced to become a job scheduler, then an estimator – a title he has held for two years. Though he doesn’t have any bee experience to speak of (yet!), Fernando’s skills have brought him well past the “novice” stage – and he is well on his way to being a true expert in the field. These three men have earned the respect of everyone they work with. Each of them takes great pride in doing their personal best each day and we are fortunate to have them as part of the Antis team. Antis is a great company that hires great people and these three are clearly some of the best…even though the bees might disagree!