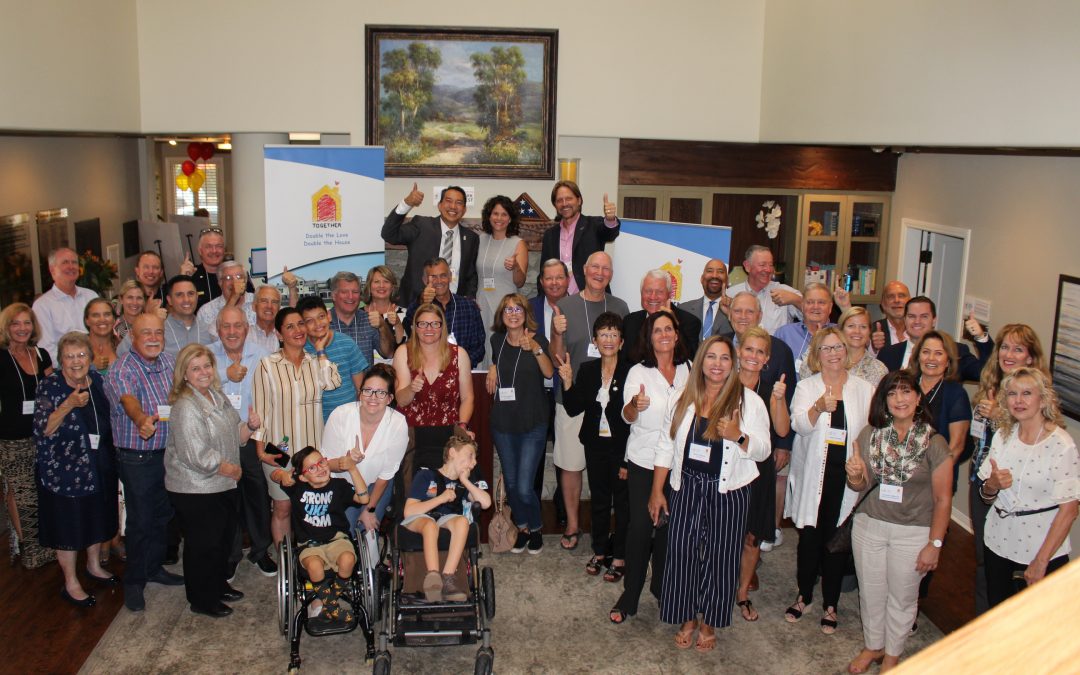 Fundraising has begun for a project that could boost capacity from 20 to 44 families.

On a good day, when there is no traffic, Dan and Summer Wenzl can make the drive from their home in Las Vegas to CHOC Children’s Hospital of Orange County in about four hours.

It’s a journey they’ve taken several times over the past two years. They bring their daughter Rebecca to the hospital in Orange to get treatment for a rare genetic condition that, so far, has slowed her growth. At 2½, she is the size of a 9-month-old.

With all the uncertainty they face, there’s one thing the Wenzls don’t have to worry about.

When they reach their destination, they know they have a place to stay that offers a home away from home: Ronald McDonald House of Orange County.

The comfort comes from more than just the safe and clean surroundings blocks away from the hospital. They’re also surrounded by families who, on some level, share their experience. There is a steady but non-intrusive stream of assistance from volunteers and staff. And the Wenzl family doesn’t have to explain themselves to have their emotions understood.

“It’s like having an entire support system in another city,” Summer Wenzl said.

Her husband, a police officer, added: “It’s funny – when (Rebecca) says she wants to go to McDonald’s, she’s talking about the Ronald McDonald House.”

Soon, that kind of comfort in a time of crisis will be available to more than twice as many families as currently can use the Ronald McDonald House in Orange. A $12 million expansion is slated to begin next year, and when construction is complete, capacity will expand to as many as 44 families like the Wenzls.

The view of the living room from the second floor at the Ronald McDonald House Orange County in Orange on Monday, September 16, 2019. Guest rooms are on the second and third floors of the house. A capital campaign is underway to finance a planned expansion of the house that will take it from 20 to 44 guest rooms and add other amenities such as two sensory rooms. (Photo by Leonard Ortiz, Orange County Register/SCNG)

Since it opened, in 1989, the house on South Batavia Street, a short walk from CHOC, has been a refuge for out-of-town families with seriously ill or injured children under treatment at local hospitals. Up to four guests can stay in one of the rooms for days, or, in some cases, months at a time, for a nominal contribution of $10 a night.

If a family can’t afford that, they aren’t turned away.

When the 20-bedroom home is full, Ronald McDonald House provides vouchers that let families stay at nearby hotels, even as they retain access to the house’s kitchen, dining room, laundry and other amenities.

The thing is, these days, the guest rooms in the airy, three-story home are always full. That’s been the case the past six years, as families rotate in and out, spending an average of eight days at Ronald McDonald House Orange County.

A McDouble on Batavia

If all goes well with a fundraising campaign to cover construction costs, Ronald McDonald House Orange County will do more than increase the number of guest rooms. It also will double the size of its kitchen and add some new features, such as two “sensory rooms” for children who are sensitive to noise and light, and a teen room for older youth who don’t want to bunk with their parents.

Fundraising, dubbed the Together Campaign, started quietly last year, when board members and other stakeholders began seeking donations. The house near CHOC is one of 368 Ronald McDonald Houses around the world, including six in Southern California. There are Ronald McDonald Houses in Loma Linda, Long Beach, Los Angeles, and Pasadena.

The fundraising campaign for the Orange County expansion goes public Thursday, Sept. 19, with a formal announcement and an appeal to help raise $4.3 million still needed so construction can start next spring. The goal is to open doors to more families in early 2021.

The world’s most famous hamburger chain provides between 10% and 15% of the financial support for the Ronald McDonald houses. The Orange County operation runs on about $1.8 million a year, with the bulk of support coming from community donations, fundraising events such as a golf tournament, and the Walk for Kids 5K.

Most of the families who stay at Ronald McDonald House Orange County – some 80 percent – have children being treated at CHOC for critical health issues. Many later become supporters who give back.

Geographically, 58% of the guests live in either Riverside or San Bernardino counties; 15% are from Orange and Los Angeles counties and an equal number come from elsewhere in California. The rest are from out of state, with 1% from other countries.

Delanie Loera travels to CHOC from Palm Springs several times a year and stays at Ronald McDonald House while the oldest of her three children, Asher, sees his doctors at CHOC. Asher, 7, was born with spina bifida, which prevented his spinal cord from developing properly.

During a stay earlier this week, a talkative Asher, wearing Sonic the Hedgehog pajamas and sitting in a wheelchair, swapped kiddie jokes with his mom and Katie Russell, operations director at Ronald McDonald House. He told them about the video games he likes to play, his favorite horror movies and what he plans to be on Halloween (Evil Sonic, combining two of his favorite genres).

Asher, crunching his way through a bag of potato chips and nutrition bars despite missing two front teeth, talked about what he likes best about the house – the toys and the decorations during the holidays. But he also mentioned the sanctuary room on an upper floor.

“It has cool lights,” Asher told Russell. “And I like the pictures, too.”

His mom is looking forward to the expansion.

“I’m mostly excited that there are going to be more rooms, because sometimes we do have to stay at the hotels,” Delanie Loera said.

“We meet more people when we’re at the house who are going through the same thing.”

Nearby, in the first-floor atrium-like common room, a mother relaxed on the comfy couch with her little girl, who bore the scarring of a severe burn. They are from Syria, brought here for reconstructive surgery through the auspices of Children’s Burn Foundation.

Another mom and teenage son staying at Ronald McDonald House this past week have traveled to Orange from their home in Toluca, Mexico, many times over the past six years. Carlos Salceda, 16, gets care from doctors at CHOC for a form of epilepsy that doctors in their homeland said could not be treated. His mom, Patricia Kick, said Carlos is now on the right medication and doing well.

Noel Burcelis, the home’s executive director, points out that in 1989, when Ronald McDonald House Orange County opened, CHOC had 64 beds to treat sick children. Today, it has more than 300 beds.

The charity had the foresight to buy an adjoining property in 2001, just to the south of the house. That’s where the new wing will be, attached to the existing home by an overhead walkway.

Depending on the time of year, such as during graduation season or when Disneyland is offering special attractions, hotels nearby fill up with out-of-town visitors and it can be a challenge to find lodging for McDonald House families that need vouchers, Burcelis said.

And as welcome as the hotel vouchers are, families prefer staying at the house because it offers something beyond amenities that include a small playground, the comfort of home-cooked breakfast and dinners provided by volunteers, and a supportive staff available 24 hours.

Most often, Burcelis said, guests have a child battling cancer or a premature newborn in the neonatal intensive care unit.

“Our focus is to care for the Mom and Dad so they can take care of their child.”

Families who live too close to stay at the house are given day passes to use the facilities – take a shower, eat a meal, or just escape the hospital. Similarly, the Ronald McDonald Family Rooms inside the CHOC medical complexes in Orange and Mission Viejo offer a safe place to take a break during long hospital stays.

In 2011, before she became a board member for Ronald McDonald House Orange County, Katie Rucker found she was able to let go of bottled-up emotions in the Family Room at Mission Hospital in Mission Viejo. It was while her youngest child, 14 months at the time, was spending a week in the hospital and suffering a dozen or more seizures a day. Rucker, from Lake Forest, did not live far away, but she wouldn’t leave her baby alone at the hospital.

Now, Rucker co-chairs the campaign to raise money for the expansion, working on the project with Charles Antis, founder of Antis Roofing and Waterproofing, who discovered the services of the Ronald McDonald Family Room when his twins, now 5, were born prematurely. In 2017, Antis launched an initiative for roofing companies to donate their services to Ronald McDonald Houses around the nation.

For the Wenzls, the support of Ronald McDonald House relieves the financial burden of renting a hotel room at each visit, while providing a place where Rebecca can rest or play between doctor appointments. They were at CHOC in early September and plan to return around March.

“It’s what makes her look forward to the trips, rather than dread them,” Summer Wenzl said, adding that Rebecca’s favorite spot in the Ronald McDonald House is the playroom with its books and toys, while hers is the kitchen.

Though Wenzl intended no offense toward burgers and fries, she said the McDonald House kitchen means “we don’t have to eat fast food three times a day.”

To learn more about Ronald McDonald House Orange County go to rmhcsc.org/orangecounty. For more on the expansion, go to togethercampaignoc.com.